Who Will Be Working From Home?

What effects how likely it is that you will work from home? 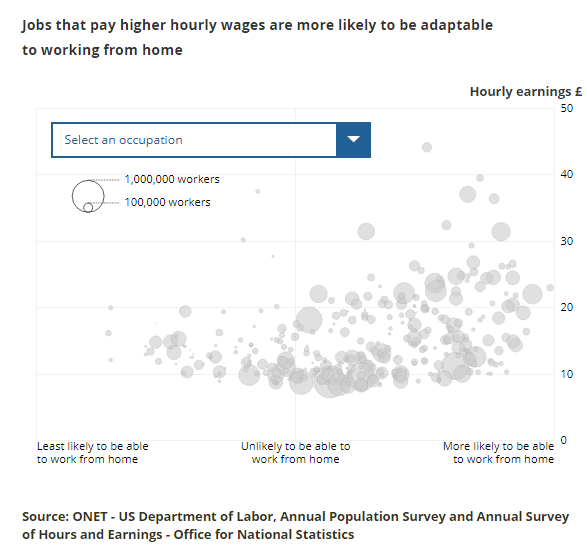 According to Office for National Statistics (ONS) analysis of how adaptable jobs are to remote working, employees in higher-paying jobs are more likely to be able to work from home. However, this also depends on other factors like:

These factors were identified to determine how different jobs can be compared on how likely they are to let their workers to work from home and how it is effected by other factors such how they are payed.

Whether or not you are a Frontline worker:

In this situation Frontline workers are grouped with the elementary occupations that are the least likely to have the opportunity to work from home. Many frontline workers have been designated as “key workers” during the coronavirus pandemic. These include police officers, paramedics, and, scoring lowest on the scale of who could work from home, are firefighters.

When compared, according to analysis, professional occupations such as actuaries, economists and statisticians are most likely to be able to be done from home. This is due to reasons such as that jobs like these, alongside management, technical and administrative jobs, involve relatively little face-to-face contact, physical activity or use of tools or equipment

How much skill and experience your profession requires: 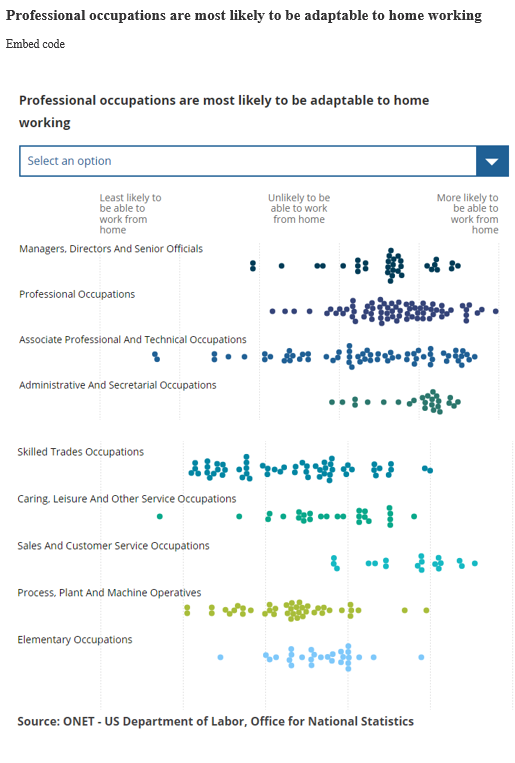 Among the jobs least likely to be able to be carried out from home, the main factor contributing to the score was the use of tools and specialist equipment. The exposure and physical activities factors generally also contributed more than location and interaction intensity. According to statistics we can see that having the previous points in mind, the jobs that are more professional on average have a larger scope on working from home.

Whether you are a man or a woman: 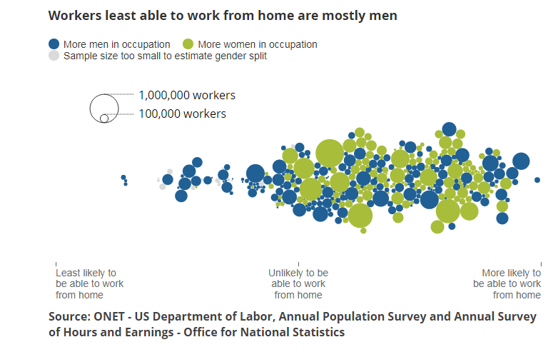 Due to chance and major freedom of opportunity the top 20% of workers that are most likely to be able to work from home are fairly representative of the gender split in the workforce as a whole: 49% are women and 51% men. However, in elementary occupations or others which can not permit their workers to work from home, the gender split is less even as 75% of workers in these jobs are men and only 12 of the 103 jobs in this group have a majority of women in them (including police community support officers, vets and radiographers). Many of the rest are dominated by men: for example, only 1% of plumbers, carpenters and joiners are women.

This brings us to the conclusion that in general men are less likely to be able to work from home.

Whether you live in the Inner or Outer London:

Jobs based in workplaces in London and the South East are much more likely to be possible to do from home compared with the rest of the UK, this could be due to a higher proportion of professional occupations in the region and the high concentration of finance and IT jobs in London. Recent analysis showed over 50% of workers with a workplace in Inner London commuted by rail or underground compared with 16% of workers working in Outer London and even fewer elsewhere. Looking at that we can say that people who live far  from London or the South-East of England are less likely to be able to work from home.

Due to small sample sizes it is hard to determine any kind of reliable conclusion. When it was tested however, with the small sample size, it has shown that there wasn’t a significant trend revealed. When looking at the fifth of the workforce in jobs with the most ability to work from home, workers from black, Asian and minority ethnic backgrounds were slightly overrepresented. As around 12% of workers in this group are from ethnic minority backgrounds, compared with nearly 11% of the working population as a whole. In the fifth of the workforce whose jobs were least adaptable to home working, just 9% are from ethnic minority backgrounds.

80% startups are trying to solve problems for top 20% Indians. We got the Pareto principle wrong. We need businesses that can make lives of bottom 80% Indians better.